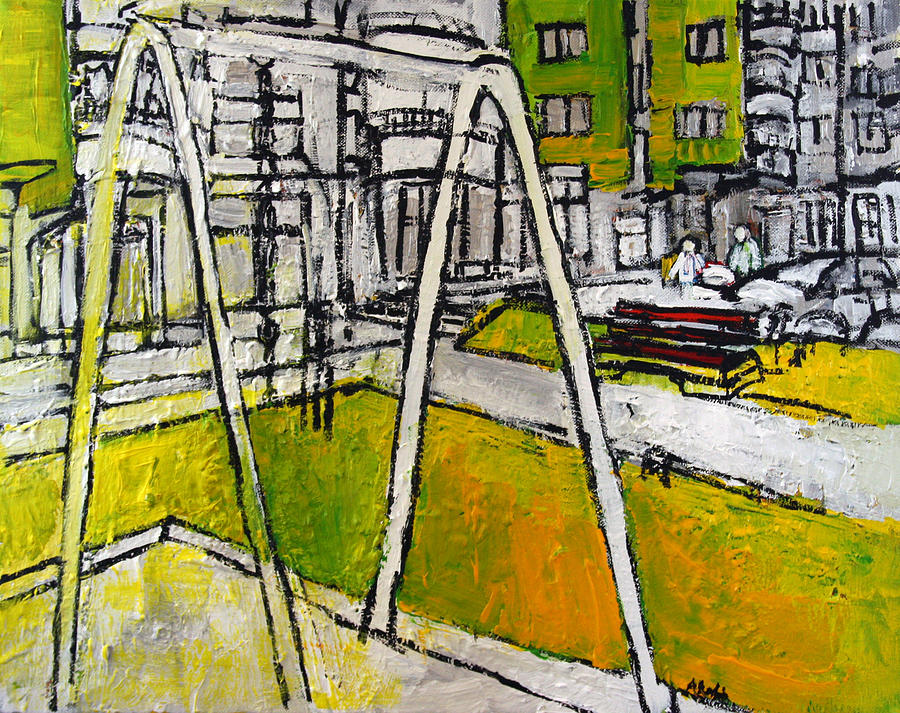 she lies back on the bench frame.
it’s uncomfortable,
but a good spot to sit and watch as the children play.
the vulgar metal poles of the swing set
are painted red and yellow,
the playground looks a kindergarten painting.
sludge brown tar mac
trimmed with green green grass,
bubblegum blue skies
and wallpaper clouds.

it is a pity, she thinks
that the young traipsers passing by
with hands held,
they do not see the grizzly side of things,
just toothless smiles, slides and swings.

there are drawings pinned to the walls,
magazine clippings
and cardboard models.
two furrowed brows sit on two pale faces,
illuminated like twin moons
by their screen,
the single light in the dark, dark studio.

pixels stacked on pixels,
the colour wheel barely touched,
the complaints of old-time mothers
burnt up before formation.
look how peaceful life can be if one makes it so!
to and fro…

cold chains hold rubber seats within a paused perimeter,
i would the naive eyes which blink at family delights
would see them snap.

morning is yet to break over the little house at the cul de sac’s tip. the kitchen lies untidy, spaghetti hardening in the plug hole as the soft hum of the fridge is fragmented by gentle whistles that seep through the thin walls. the first light falls over the curling pages of open books, read only by the bent heads of dried-up roses, peering over the edge of their thirsty vase. petals tumble into empty bowls, their sweet scent wedded with the growing stench of day-old milk. it’s a carnival for the senses, if only one would buy a ticket.

the room is thronged with a cocktail of vapours; sweat and steam cling to the mirror like teenagers, bent on imperfection examination.

‘i shall never be clean,’ she moans. the bathroom floor is littered with shards of soap, fragranced fragments that decorate the greasy linoleum like pointed pebbles on a dirty beach. an old towel holds her damp hair – a mother’s hand, gently secure in her naked vulnerability.
‘i shall never be clean,’ she sings. another soapy slither drops to the floor, milky suds pooling beneath it; a sailboat at low tide.
‘clean…’ wrinkled fingers unwrap a fresh bar. clean, smooth – it plops beneath the bathwater, and the baby splash makes her giggle.

she did not care for fashion, she dressed herself in spirit and wit.

i long to ask my older self – did you chose the rugged road of refined rejection, or the smooth street of simplistic sellout?

the pearls of poesy fester inside the labyrinth of my mind, trapped in shells and earthy mounds by a great guard, who wields the sword of a blank mind at the maze’s leafy entrance.

he believed her milky white,
created from the clouds –
untarnished, pure.
and hence, plans put forth were designed
for one who shared these traits,
written out for a woman
who had barely lifted her feet from girlhood.
eliza doolittle in her naivety,
mrs de winter in her foolishness.
he hunted her out like a sniffer dog,
following the lonely scent of failed dreams
to her front door
and found her…

yet she did not scream,
she was silently stoic
as one who has already seen these things
and watches from the wings,
as the two-minute bell rings